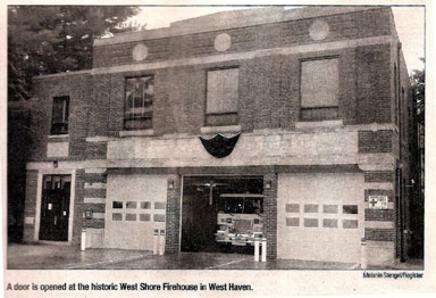 The district's firefighters still operate 24 hours per day out of the building that also houses monthly meetings for community organizations, such as the Prospect Beach Fish and Game Club.

Fire Chief Harold C. Burns praised McKeon's efforts, saying his personal favorite historic feature within the building is the hand-painted map crafted in 1935 by commissioned WPA artist Ernest H. Hart, who included native animals on the road map of the district that has since changed with the additions of roads and other landmarks.

Burns said the fire district is not only pleased by the designation, which McKeon will present to the Board of Fire Commissioners tonight at 7, but also appreciative of McKeon, who Burns deemed the departmental historian years ago because of McKeon's passion for and family connections to the department.

said. McKeon noted that an official letter and certificate will be mailed to the district, and that he hopes to buy a plaque to post outside the building. The public is always welcome to tour the building, he noted.

​Jul. 12, 2007--WEST HAVEN -- For West Shore Firefighter Kevin McKeon, the Ocean Avenue headquarters is a "home away from home."

For more than six decades, various men in his family served the independent fire district with vigor and dedication, sparking for him a recent one-year endeavor to thoroughly research the 1936 building's historical significance within the community.

On Wednesday, McKeon's nostalgic search paid off when the state Historic Preservation Council of the Commission on Culture and Tourism voted to place the community treasure officially on the State Register of Historical Places.

The honorary designation, established by state statute, does not necessarily prohibit a property owner from demolishing the property, but it guides local and state officials, as well as the public, in "identifying historical buildings which merit preservation," according to a letter the commission sent last month to McKeon.

"I did it on my own because I love this firehouse so much," said McKeon after the decision-making hearing held at the South Congregational Church in Hartford. McKeon said he also learned the designation makes the district eligible for state aid should it want to renovate or repair the building, which in a deficit-strapped city is a bonus for taxpayers.

Erected in 1936 by the federal Works Progress Administration that provided jobs to help those unemployed during the Great Depression get back on their feet, the brick edifice sits like an architectural island surrounded by beach-front cottages and modern buildings along Ocean Avenue and nearby Dawson Avenue. The firehouse is at 860 Ocean Ave.

The "labor of love" binder of documented research McKeon submitted to the state also indicates the subdued art-deco style of the building surfaced from the imagination of Norton & Townsend Architects. That firm also designed the Mount Hope Temple, or the former Dixwell Branch Library, in New Haven.